Today started overcast and then started to rain within 10 minutes of leaving the start! It then rained or drizzled for a good two hours which resulted in slippery roads and tricky descents. I didn’t crash!

The route took us up a very steep climb over Wenlock Edge, horrible and very busy with lots of cyclists struggling up and a great big tractor and trailer coming down – we really made the tractor driver’s day, followed by the drivers of several large flat bed lorries wanting to use the narrow lanes. The lanes were single track with gravel and mud in the middle – there was a lot of bike washing at the end of the ride.

I ended up cycling with a Netherlander and a South African (Menno and Louis) who both work in London. Although I did some work on front I’ll be the first to admit they pulled me along most of the way. The ride was the flattest of the nine days and meant to be the easiest. However, I found it tough probably due to the pace we set. We left at 7.30 am in the last 50 or so riders to leave Ludlow and got to Haydock just before 3 pm with no more than 50 bikes in the bike park, a distance of 107 miles. I was really flagging over the last 10 miles.

Haydock Race Course is great (except for the noise from the M6!). This photo gives you an idea of the scale of the Deloitte Ride Across Britain. There is usually another huge marque with the catering and medical/massage area as well. We used all of the main race course building instead. 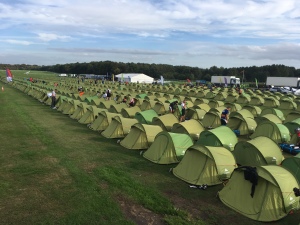 Tomorrow is our last day in England when we ride 107 miles to just north of Penrith. We have an eight mile climb up Shap Fell to look forward to!

PS I forgot to mention my highlights of the day