It is slightly scary to think that in exactly five months time I should be in Bath having cycled from Oakhampton during the day.  Next weekend I have a training day with other riders taking part the in the event.  It will be a great opportunity to meet some of the riders and compare how we are getting on with the training.  The day starts at Princes Risborough which is six miles from where my Mother lives which makes it very convenient.  It is also her birthday weekend so a good opportunity for a visit.  One of the rides near Princes Risborough is Whiteleaf Hill, a climb of about a mile and a half but with an incline in parts of 16% – hopefully the training ride organisers will not be that cruel to take us up it !

Today I took part in the KOM Sportive organised by Lawrence Cronk, my trainer at Enduraprep.  It was dry (great) and slightly cool (even better with the amount of climbing we had to do).  I chose to do the “short” ride of 98 km which still involved 1,883m of climbing.  I couldn’t face the 130 km ride with something like 2,800m of climbing.  I was slightly faster than last year even though this years route was longer and involved more hills – hopefully this is a good sign.  I’ll be going over the other statistics from the ride later (it’s the geek in me).

The ride started out from Treforest and almost immediately we had a 11% climb through Pontypridd and up towards Llanwonno.

The downhhill into Ferndale was pretty good but not as good as the road from the top pf the Rhigos into Treherbert – fantastic smooth tarmac and a top speed of 67 kph!

The second feed station was reached up what can only be described as a cart track – narrow, stones and rocks in the middle and seriously steep.  The worst point was meeting a 4×4 which was coming down the track and I had to stop – getting going and clipping back into the pedals was not fun.

The last major hill of the day for me was the Church Road climb into Pentyrch, a ride I had done a couple of times before.  Rather than turning left at the top which I had done on the previous rides, we had to turn right and continued climbing – not at all what I was expecting.  The final incline was a short sharp hill up to the finishing line in the University of South Wales campus – all the riders ended up being in their best climbing gear and seriously out of breath !

All in all a good 4 and a bit hours of cycling so a big thank you to the organisers.  I just need to see where I came on the timed climb up the Rhigos.  I also have a nice new KOM polka dot buff, although I’m not sure how long it will stay white…

It finally felt like Spring had arrived this weekend with two dry rides over Saturday and Sunday.  Saturday was a bit of a surprise as light rain was forecast in the morning.  However, the rain held off and I had my first 100 km plus ride of the year (about 64 miles) in just over four hours.  I’ve only got to increase the distance to 110 miles to match the distance I have to cover each day in September – all a bit worrying!

Sunday morning was nice and sunny so I thought I’d do a two hour “cake and coffee” ride to Cowbridge and back through the Vale of Glamorgan. 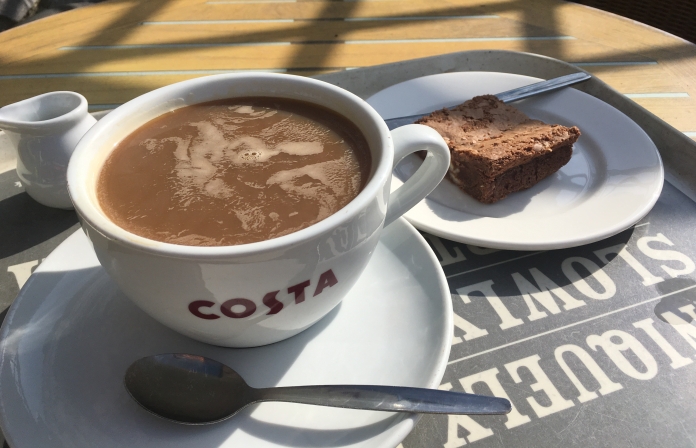 Lots of other cyclists had the same idea and both Costa and Cafe Nero in Cowbridge were doing a roaring trade from visiting riders.

You don’t realise how many small hills there are in “the Vale” until you get out on a bike.  However, you do get to see the changing seasons in the countryside and signs of life after the rather grey winter days.

One thing that does disappoint me is the amount of litter in the verges and hedge rows.  The worst section today was the Old Port Road just above Wenvoe on the way to St Lythans – full of Carling and Coke cans plus discarded McDonalds containers.  Perhaps a deposit scheme may reduce the cans being thrown out of cars?

I’ll be saving the “Big Hills” of the south Wales Valleys for Sunday 8th April – the KOM Sportive organised by my trainer Lawrence KOM link.  I really don’t have any option but to take part – the alternative would be multiple intervals sessions on a turbo trainer and burpees until failure!  I’ll decide on the day whether I do the 130 km or 95 km routes – both have lots of climbing (my pet hate, probably because it would help if I lost a bit of weight).  I’ve also entered the L’Etape Wales and the Dragon ride in June – plenty more climbing over three days.  It will be a good test for the legs and lungs.

Finally, with a break from the bike, I had my first sail of the year at Sully Sailing Club

on the Bristol Channel in the afternoon.  I’ve been sailing for over 40 years and it’s a good “release” for me. I sailed a Laser today which is a full body workout, with particular emphasis on core strength – think of doing sit ups for 5 minutes every 10 minutes or so when sailing round a course.  A bit of cross training for the bike riding.  I even managed to win both races although there were less than 30 seconds in it despite each race being between 40 and 50 minutes long !

Finally, a reminder why I’m doing the Deloitte Ride Across Britain in September and asking you to sponsor me.  I want to raise lots of money for Dementia UK, a charity that helps people with dementia and their carers.  Dementia is a horrible disease for everyone concerned and any support can make a huge difference.  You can visit my Virgin Money Giving page here